The Manchester Museum has a collection of ninety vehicles, ranging from an 1890 horse bus to a 1994 accessible minibus. Seventy of these vehicles are housed under one roof at Boyle Street , Cheetham, Manchester M8 8UW. The vehicles in store elsewhere are rotated, from time to time, with vehicles within the museum. 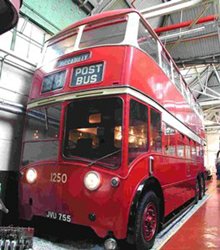 Amongst this vast collection of vehicles are two trolleybuses of local operators, which can be found in the upper hall. These are Ashton-under-Lyne number 80, registration LTC 774, built 1949. This is a locally constructed Crossley TDD42/2 2 axle double-deck trolleybus having a Crossley body. It was one of five built for Ashton. This vehicle was the last of the five to be withdrawn in 1964. Number 80 is currently under restoration.

The second trolleybus is a Manchester Crossley six wheeler. This was one of 16, known as the Dominion, which entered service in 1951 and were type TDD64/1, the only ones constructed. Fleet number is 1250 and carries registration number JVU 755. Crossley were relatively late coming into trolleybus manufacture. They had been the major supplier of motor buses to Manchester Corporation and it was only after Manchester announced their intention to convert some tram routes to trolleybus operation that Crossley took up trolleybus production from 1936. The first Manchester vehicles were delivered for the commencement of trolleybus operation in 1938.

Number 1250 was withdrawn from service around April 1963 when the Hyde Road route (service 210) serving Denton, Hyde and Gee Cross finally ceased on 28th of that month. Motorbuses had started working on the route from January 1963. 1250 is cosmetically restored.

Both vehicles are fitted with Metro Vick electrical equipment. The motors were probably of differing sizes due to the length and weight of the vehicles.

Ashton and Manchester operated three joint services, routes 217, 218 and 219. The latter two linked these two places and therefore Ashton vehicles were seen in Manchester on a daily basis and vice versa. 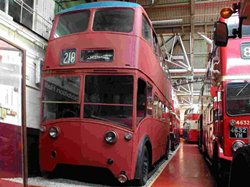 Other than Ashton and Manchester , Crossley only supplied trolleybuses to two other UK operators, Kingston-upon-Hull and Cleethorpes UDC. As no Kingston-upon-Hull trolleybuses were preserved and the only Cleethorpes Crossley, which latterly was with Walsall Corporation, was regrettably scrapped after many years in preservation; it makes Ashton 80 and Manchester 1250 rather unique.

The museum is open on Wednesdays, Saturdays, Sundays and Bank Holidays (open everyday in August 2013) throughout the year, except Christmas and New Year. Opening times are 10am to 4.30pm.

Admission prices at the time of writing are: Adults £4.00; Over 60’s, children and students £2.00. Accompanied children under 16 and registered disabled enter free.

For more information regarding the museum visit the website www.gmts.co.uk