This museum has been established at in the former Priory Heath trolleybus depot, Cobham Road, Ipswich, Suffolk since 1988. The depot was built in 1937 to house the rapidly growing fleet of trolleybuses as the Ipswich network expanded.

The museum houses an extensive collection of transport related items from the local area, either by way of manufacturer or operator. In addition to the numerous artefacts, the museum has agricultural and commercial vehicles, Ipswich 3 feet 6 inch gauge, open-top tram number 33 of 1904, as well as motor buses and trolleybuses. Apart from two museums which operate trolleybuses, this is the largest collection of preserved trolleybuses at one location in the UK. 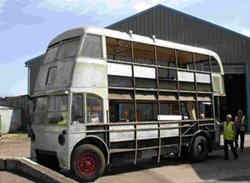 In all there are six "complete" vehicles and one trolleybus chassis. I use the term "complete" to denote chassis and body, as several are minus electrical equipment and others are awaiting restoration, so parts are either missing or in need of replacement due to their condition. All the vehicles were part of the Ipswich Corporation Transport fleet between 1923 and 1962 and are therefore representative of the system from its commencement until its closure.

Number 2, registration DX3988 is the oldest vehicle, dating from 1923. It is from the original batch of three vehicles for Ipswich. It was initially hired from the manufacturer, Railess and had a 30 seat Shorts body. It was the last of the three to be withdrawn from service in 1934 and became a caravan at Flatford. No. 2 was acquired by the museum in 1977 and was restored to its present state as a static exhibit by 1981. A replica Estler trolleybase (where the two trolleypoles are mounted one above the other on a central pivot) was recently fabricated and fitted. The interior of the vehicle still requires fitting out.

Number 9 is a Ransomes D, built 1926 and registered DX 5610. This vehicle had originally a 30 seat dual entrance/exit body, also built by Ransomes, Sims and Jefferies but was later rebuilt in 1930’s with the front entrance closed off and 31 seats. It is thought that the 50HP motor was also of RSJ manufacture.

After withdrawal from service in October 1949 it became part of a dwelling at Theberton before being acquired for preservation in July 1972. It is on display in as acquired condition in the Museum

Like the rest of this group of vehicles it was initially fitted with solid tyres before being replaced with pneumatics in the 1930’s.Withdrawn from service in June 1950, only the chassis now survives.

Number 26, is a Garrett ‘O’ type, of which there were also fifteen (21 - 35), built in 1926 for tramway replacement. This vehicle has Strachans & Brown 31 seat bodywork, which was refurbished just before World War II. It was withdrawn in 1945 and became a summer house at Pin Mill. It was initially rescued by the Long Shop Museum at Leiston but was donated to the Museum in 2004. This vehicle carried the registration DX 5629. It is currently stored outside but sheeted due to shortage of space.

It has been on loan to the Ipswich Transport Museum since 1995 since when it has been undercover for the first time in 50 years. This vehicle carried the registration DX 5629

Number 46, registration No. PV 817 was one of Ipswich’s first batch of four (46-49) double-deck trolleybuses. The complete vehicle was constructed by Ransomes, Sims and Jefferies in 1933 and number 46 appeared at the Commercial Vehicle Show. A further 18 similar vehicles followed in the period 1934 -36. Initially, these vehicles only had 48 seat bodies but most had 2 additional seats fitted during 1949/50. Number 46 was one of three to have the front of the vehicle re-styled by Ipswich Corporation. 46 was withdrawn in August 1951 and became a caravan at Needham Market before being acquired by the museum in January 1971. All the necessary electrical equipment is now in stock to restore this vehicle; however, the estimated cost is up to £80,000. There are no immediate plans to commence work on this vehicle

Number 105, a Karrier W4 built 1948 with Park Royal bodywork. Whilst badged as a Karrier model, a legacy from World War II, the chassis, in keeping with all the others in this batch, was built in the Sunbeam factory at Wolverhampton. The double-deck body seated 56. Number 105 was registered PV 8270. Unusually it was delivered with wooden seats 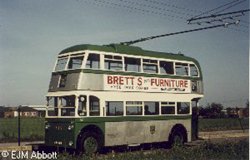 With the run down of the Ipswich trolleybus system, number 105 was withdrawn from service in April 1962. Following withdrawal, it was firstly converted to a mobile Civil Defence Showroom. Later it became a temporary canteen, still in the ownership of Ipswich Corporation. It was purchased from them in 1971 for preservation. Restoration work is currently underway and it is hoped to restore it to full working order over the next couple of years. It is on display on one of the Museum’s vehicle restoration pits.

Number 126, with the same chassis as number 105 but this later built vehicle was (correctly) designated as a Sunbeam F4. Again built with 56 seat Park Royal bodywork, 126 was numerically the last vehicle in the Ipswich fleet. It was only the last batch of twelve, constructed in 1950 that had registrations containing three letters. No. 126 is registered ADX 196.

126 was one of eight trolleybuses sold off in 1962, these being purchased by Walsall Corporation. This trolleybus became number 347 in the Walsall fleet, in which it operated until early 1970. By that time Walsall Corporation had become part of the West Midlands PTE who decided to close the Walsall system. 126 was purchased later that year and was stored and operated for a time at Sandtoft. It is now in the Ipswich museum where the interior is being restored.

The museum's opening times are detailed on their website.

The "Come ride our Buses" event which is usually held in early October is highly recommended.

Footnote: There is one other Ipswich trolleybus preserved. This is number 44, owned by the Science Museum and kept in their store at Wroughton, near Swindon. This is not normally open to the public.

Article by John Zebedee, published in 2007.