In July 2002 Bournemouth 99 (also known as 212) ran again for the first time in many years. As noted in the BTS Preserved Fleet page, 99 suffered a major traction motor fault some time ago. The motor had been removed; the repaired unit was refitted, and much rewiring of the vehicle took place. 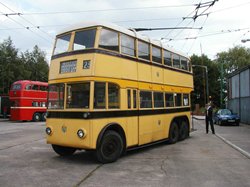 Visitors to the 7th July 2002 Sandtoft Open Day were delighted to see 99 running on test. At that time the brakes still needed overhaul and the interior needed considerable attention.


The photograph shows 99 being removed from the overhead after her successful test run.

In March 2003, member Graham Bilbé decided it was time 99 received some attention. Unable to use the workshop, he managed to work on some of the braking system from above, and also attended to a few other minor jobs. Here she sports her chrome drivers windscreen again! (See photo, left).

Since then, Graham generally sorted out the brakes, and the interior and bodywork received attention. It was hoped at the time that 99 would be running again at Spring Bank 2003. 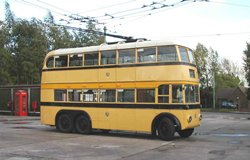 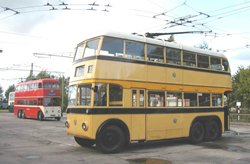 Success! 99 was sufficiently restored to be launched back in to service at Spring Bank 2003! And a fine sight she made!

As one of the oldest members of the fleet (dating from 1935), 99 was used sparingly. During 2007/8, she had further work done on the brakes, resistance banks, bodywork, and other restoration jobs. However, electrical problems began to occur and also a problem with the upper deck bodywork appeared and she is now off the road until repairs can be carried out.