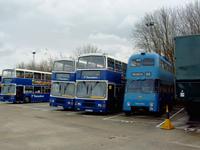 Walsall 872 was towed from Sandtoft to Thamesdown Transport in Swindon on Tuesday 20 December 2011 for restoration work to be carried out. It is seen parked amongst the double deck fleet of Thamesdown Transport awaiting moving into the paint shop in the new year when the work will commence. Internally just the seats require re-upholstery. Externally the damaged panels will be replaced and a full external repaint will be carried out. See below for progress reports.

Externally all panels that required replacing have been replaced. Sanding down the reamining panels has begun as can be seen in the views seen here. With thanks to Roy Fawcett for use of his photos.

The photo to the left shows the seating so far re-upholstered and very nice it looks too.

Graham Bilbe and Roy Fawcett recently visited Thamesdown Transport' in Swindon to see the progress on 872. As can be seen, the external repaint is now complete. Vinyls are being produced for fleet numbers, crests etc. The cab has been repainted although the fleet number and last repaint date in Walsall has been left untouched. Jobs outstanding include re-coating the platform and staircase handrails, re-fitting the seats and a few other minor bits: expected to be finished in early June. Photos taken by Graham Bilbe. 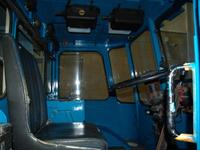 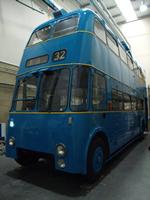 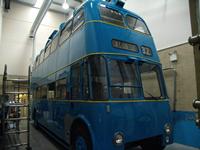 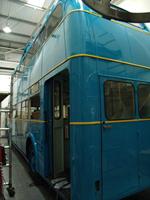 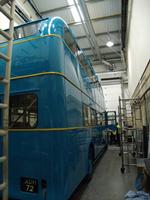 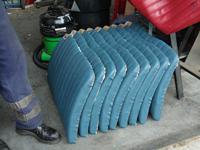 Walsall 872s body restoration has been completed by Thamesdown Transpoort and it was towed back to Sandtoft on Thursday
10 January 2013. A major mechanical overhaul will now be carried out and it is hoped that 872 will be recommissioned into service at The Trolleybus Museum At Sandtoift later this year.