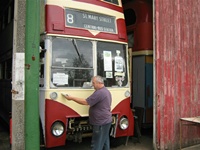 Following the sad loss of members Geoff Griffiths and Mike Dare in recent years the BTS Committee decided to restore Cardiff 203 in memory of both gentlemen.

It was always Mike’s intention that once South Shields 204 had been restored, Cardiff 203 would be the next BTS vehicle for ‘the treatment’. In view of all the work that Mike had done not only for the BTS but also the Trolleybus preservation movement in general, it was felt that restoring 203 would be a fitting tribute.

Likewise, Geoff did a lot of work for Sandtoft, The Black Country Museum, Carlton Colville and, much nearer to his home, the Cardiff & South Wales Trolleybus Project. Geoff’s specialist role was as an electrician and he has helped solve many a problem on trolleybuses at the various trolleybus museums and, again, being a Welshman, restoring 203 in his name was also seen as a fitting tribute. 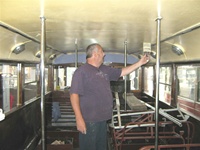 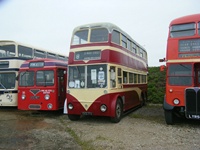 An appeal fund was launched by Roy Fawcett and Dave Hall at the Sandtoft Gathering in July 2006. Thanks to the generosity of a lot of people, the cost of restoration to the BTS was considerably reduced. With enough funds now in place, restoration work was started by Brian Maguire (bodywork) and Bruce Lake (electrical work) in early 2009. It has proved to be quite a costly restoration job as the electrical motor had to be sent away to repair a serious defect and also all internal seating has had to be completely re-upholstered. 203 has been repainted into the streamlined livery it wore between 1946 and 1950 and was re-launched into service at Sandotft on Sunday 30 May 2010 following a ceremony performed by BTS Trustee Lord Stoddart of Swindon.

The photos included on this page show the 203 Restoration Fund appeal being launched together with restoration progress at various stages and finally 203s relaunch into service at The Trolleybus Museum At Sandtoft..  To see a larger image, left click on each photo

To read the complete history of Cardiff 203 click here 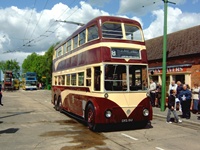