Manchester 1344, now back under BTS ownership, was towed from Carlton Colville to Thamesdown Transport's depot in Swindon on Sunday 21 November 2010. Whilst there it was externally and internally restored and the seats re-upholstered. 1344 was re-commissioned back into at the Trolleybus Museum at Sandtoft over the Spring Bank Holiday in late May 2011 as part of the BTSs 50th anniversary celebrations. For the story of 1344s restoration see below. For a report on 1344s re-commissioning into service click here.

1344's history is documented in the Fleet List pages. 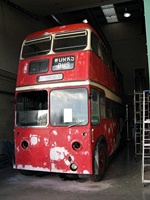 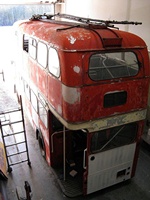 The first phase of 1344s restoration has begun. These photos were taken on 10 December 2010 and shows the exterior completely sanded down and panels replaced where necessary. The next stage is to prepare the interior for a repaint as well as taking out all the seats ready for them to be re-upholstered by Thamesdown Transport.

A visit to Thamesdown Transport depot on 28 January 2011 showed much progress has been made on 1344 as follows:- 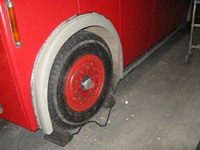 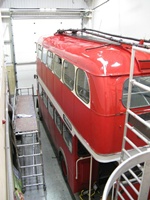 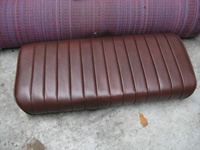 Interior: seat backs removed, these and the squabs stripped for re-trimming, most of the new squab covers made up (leather) and a sample one completed – looks great! Most other leather sections cut out in preparation for making up. 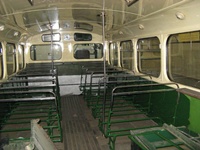 Lower side panels, (both decks), seat frames and upper staircase surround repaint in the darker green. 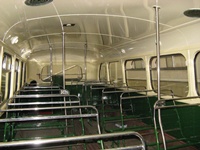 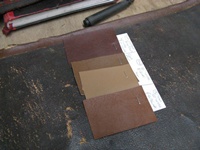 In addition agreement has been reached on suitable material to re-cover the ‘seat back backs’ – It was hoped possibly to salvage the old ones, but this proved impossible. Furthermore, when the edges were exposed, the original material was a reddish-brown, not the very tarry-brown (almost black) that they had ended up! The stubbers have, of course, been carefully put away for refitting on completion!

A course of action on the floor covering, which was quite distressed along the edges of the upper deck has also been agreed. This will now be cleaned, glued down, and some broad edge strips applied to secure the edges, The whole floor covering will then be repainted in dark red to match the existing colour so far as possible. The lower deck was not so bad, though in places the leathercloth covering has been torn away. It was agreed to paint the ‘under-seats’ areas either side, leaving the centre gangway for the time being – although it may be decided later to do this as well, but it is thought  it will look less ‘garish’ left as is. 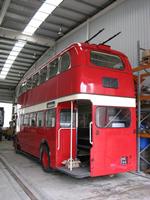 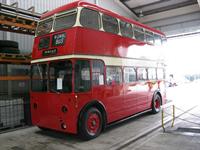 The restoration of Manchester 1344 is now almost complete. It has moved from the paint shop at Thamesdown Transport';s depot and is now in their workshop having the finishing touches applied.

The paintwork is gleaming and very nice she looks too 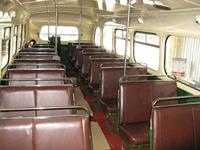 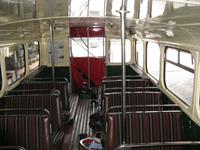 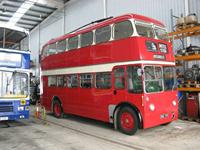 The restoration work on 1344 undertaken by Thamesdown Transport was completed by early March 2011. It looks superb and is a credit to those who undertook the work. The towing crew of Jonathan Pye and Richard Bilbe together with the Scammell Tow truck collected 1344 from Swindon on the morning of Saturday 12 March 2011, reaching the Trolleybus Museum at Sandtoft later that day. 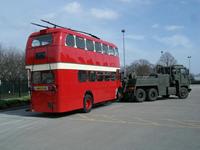 Once back at Sandtoft there are some tidying up jobs to do. It will also undergo a full mechanical and electrical test and finally the fleet numbers, crests etc will then be put on ready for its relaunch into service at Sandtoft on Sunday 29 May 2011 as part of the BTS's 50th anniversary celebrations at Sandtoft over the Spring Bank Holiday weekend.